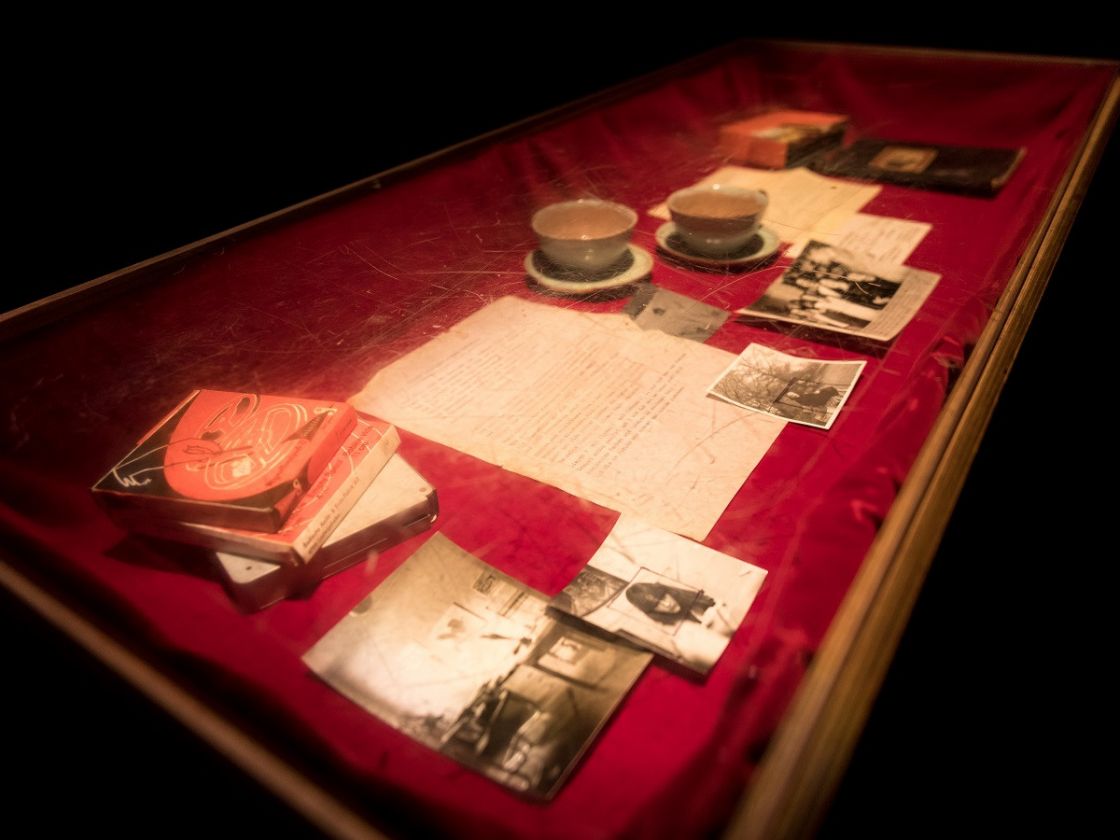 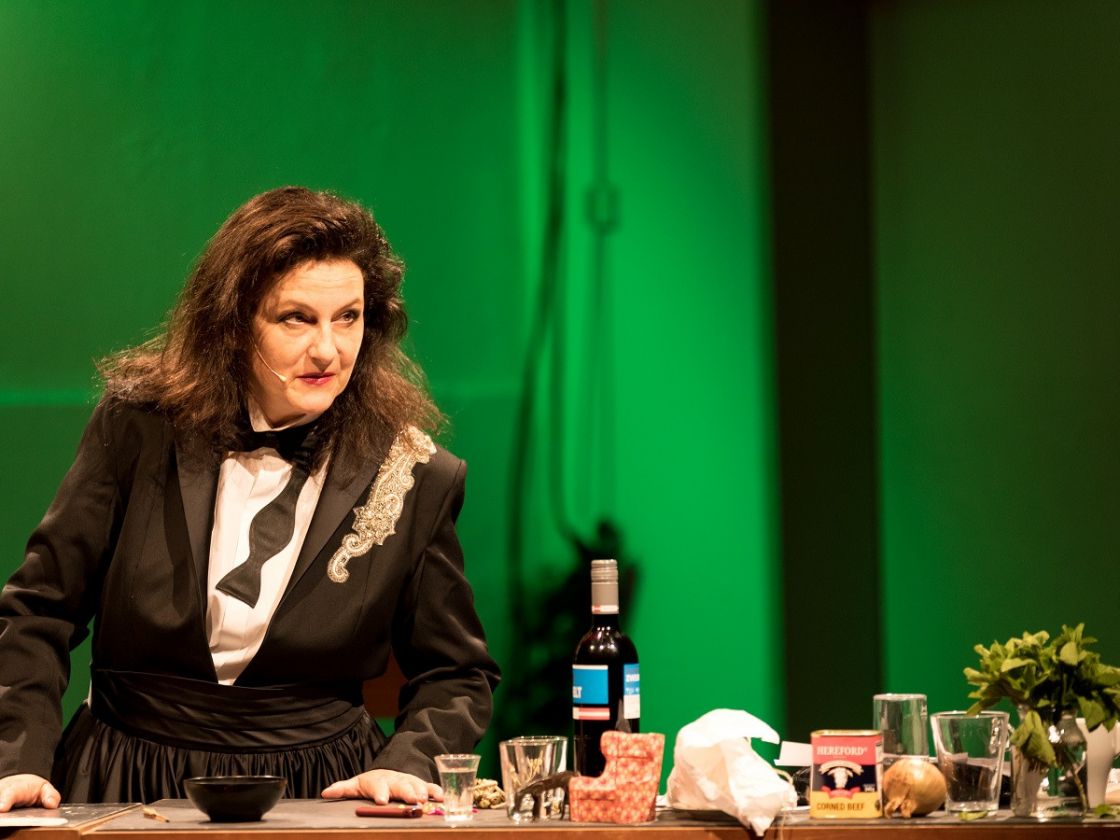 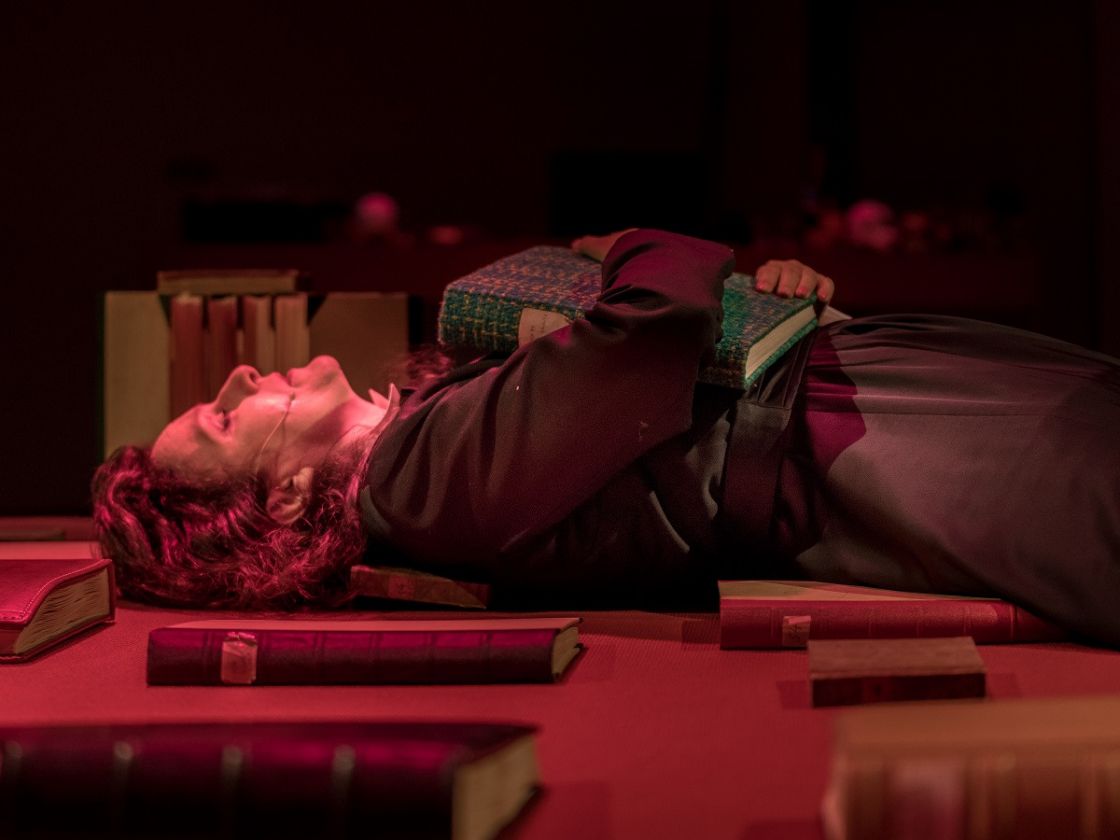 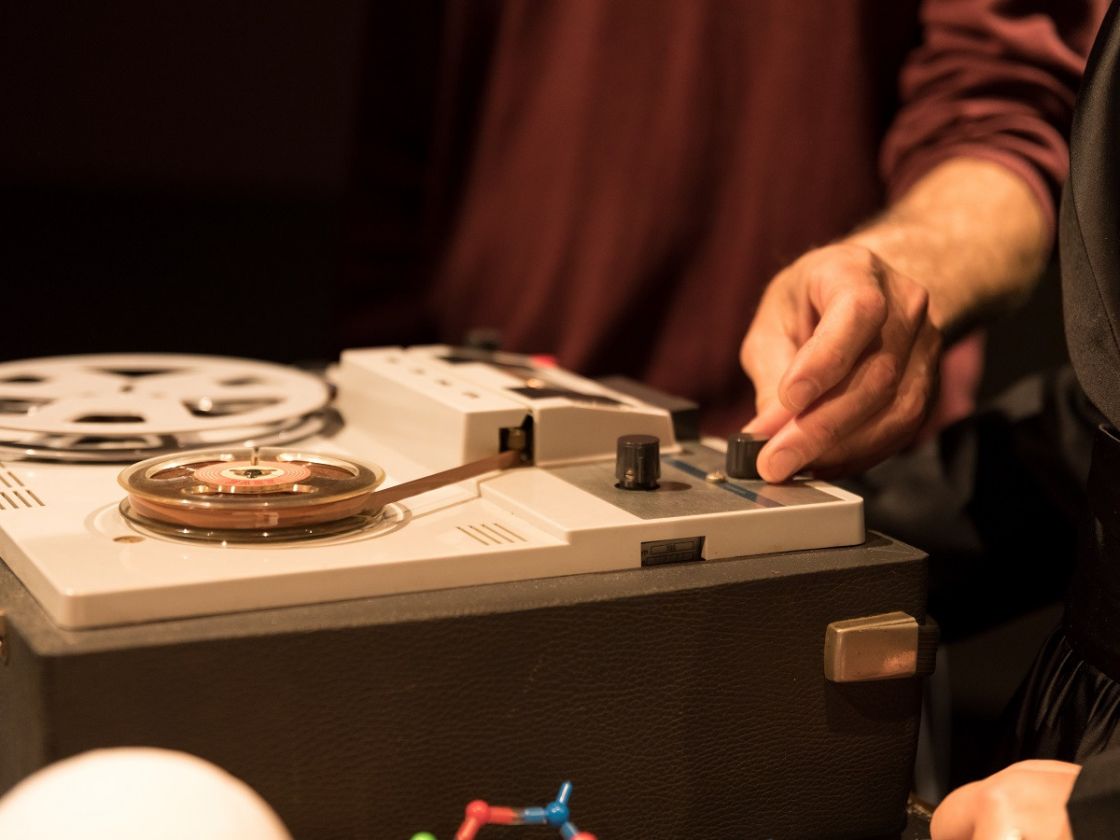 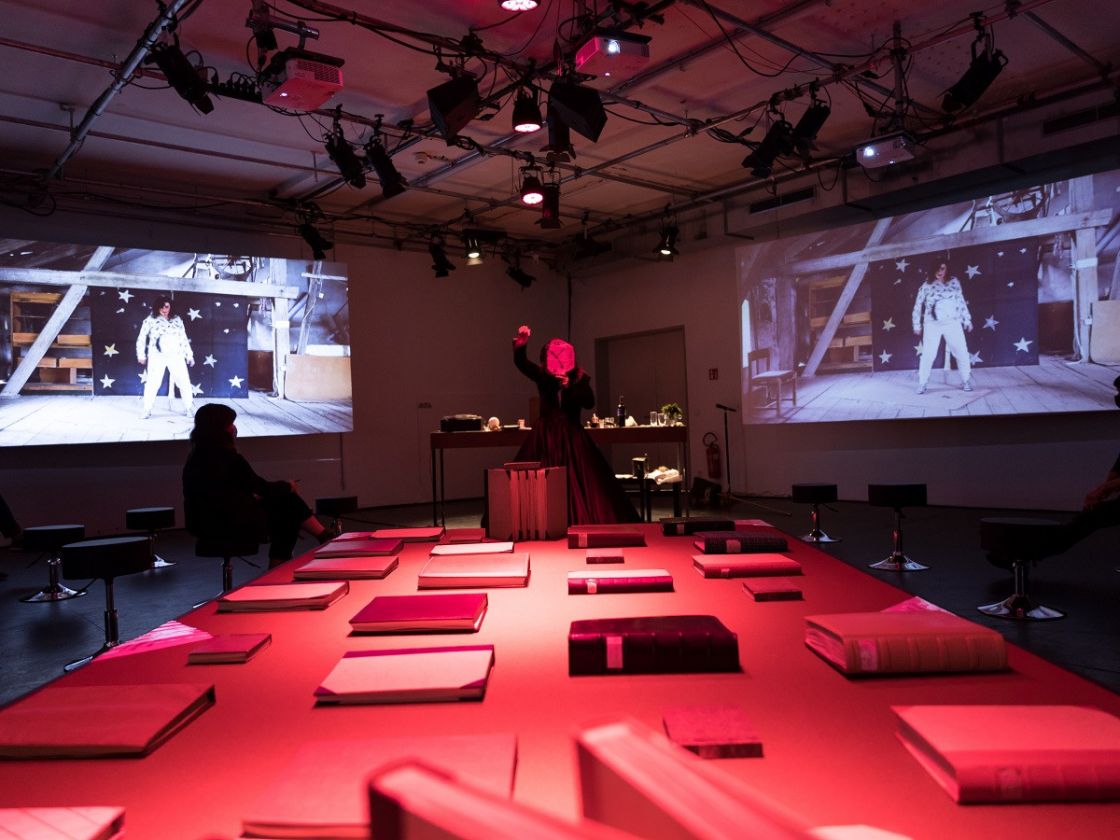 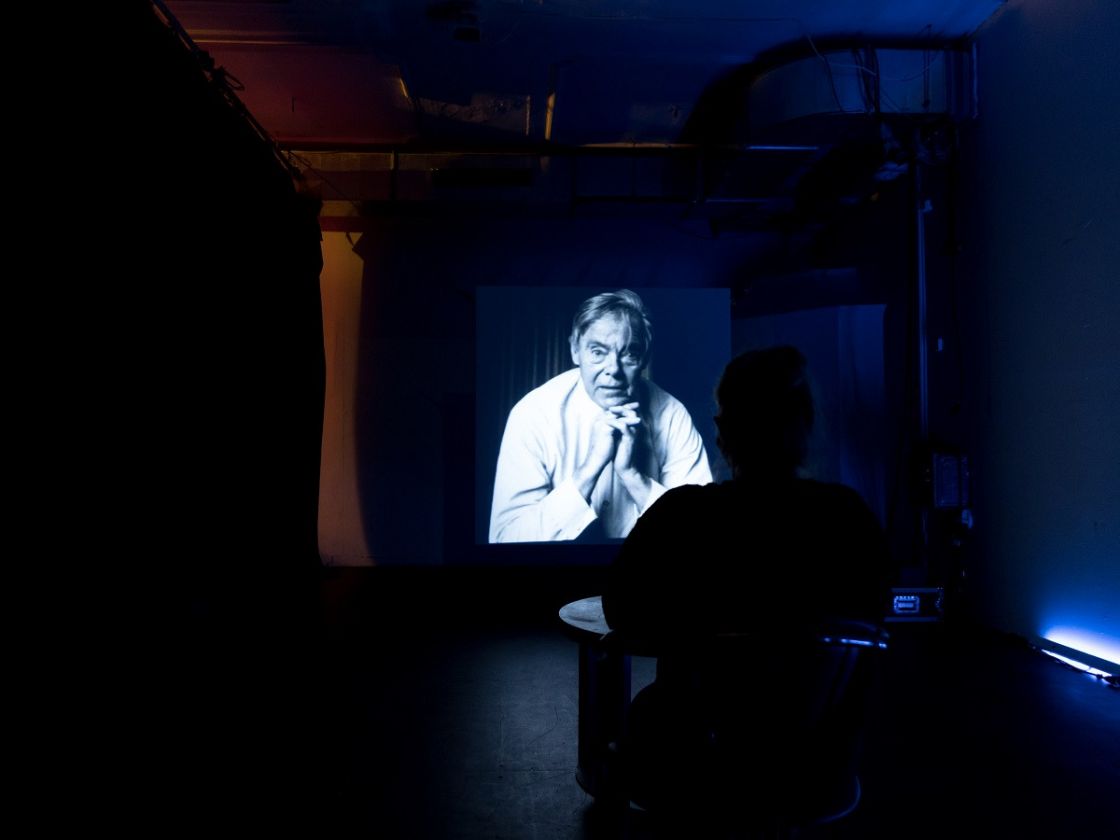 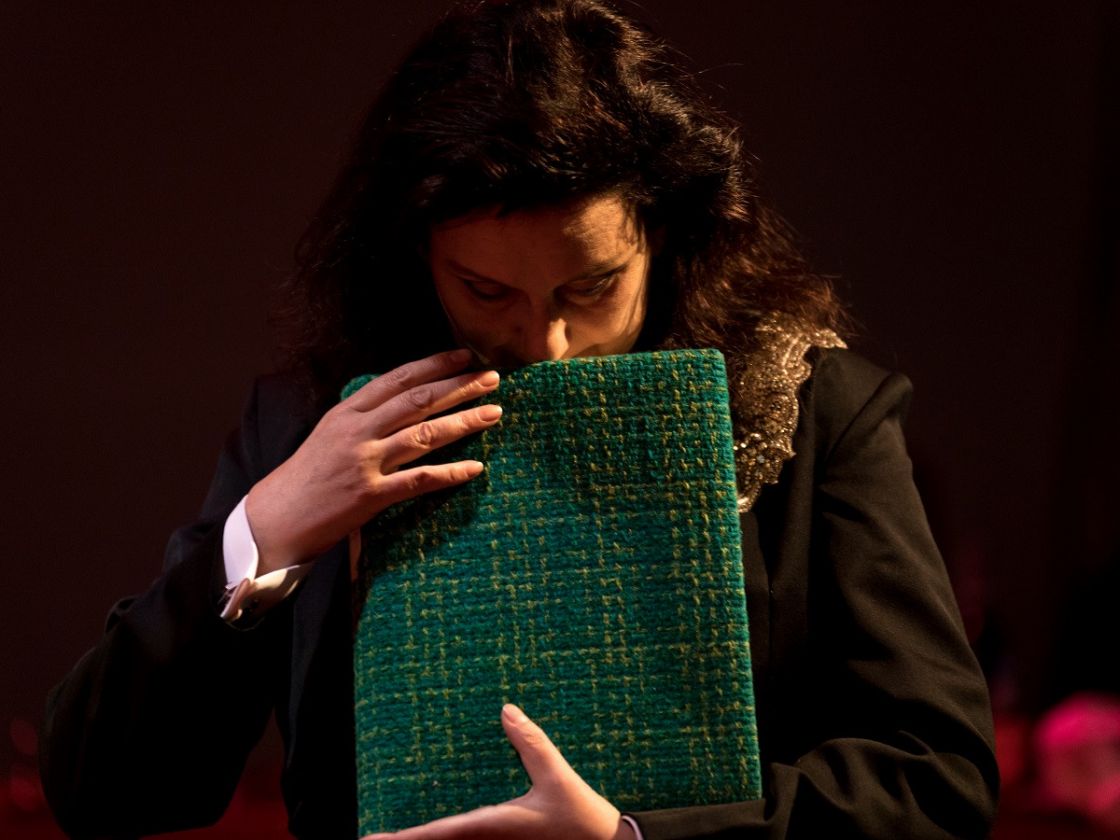 Jutti and Walter Ladengast! I was 5 or 6 and always dragged my brother along to them; they lived one floor below us. We sat there and I was so shy and we just looked at each other. There was very little talking. And that became a love, a total love, a great love! Walter and Jutti Ladengast. He was an actor (e.g. with Werner Herzog), she was a goldsmith. And I was often there, in their empty apartment without carpets and wallpaper – only Bauhaus furniture and a few pictures. That was a scandal at the time. I wanted to be like that. Poor. Without carpet. With pictures. And a hibiscus with a fiery red blossom. They used to live in a studio in Vienna and told me a lot about the time in Vienna. And they taught me a lot. The love of life. The arts. The Muppet Show. Drinking wine from small glasses. Death. Walter’s death was also a gift. To be able to be so close to him even then. I will never forget the two of them. (Cora Frost)

This evening tells the story of a friendship. The friendship between Cora Frost and Walter Ladengast, the actor, lyricist, painter, photo artist and, last but not least, neighbor from Cora’s childhood days, who died in 1980 at the age of 81. With his pictures and poems he was not only a chronicler of his life, but almost of an entire century: “In the midst of constant upheavals and catastrophes, his very private view testifies to an unswerving adherence to beauty, to people, to art and to life itself.” (Franz Reimer) In a séance for and with him, we listen to his voice and watch his images and photographs form into a slow film of life that flows quietly past us. Two lives strangely linked in retrospect. A coincidental affinity of souls.

Sogar dein Tod war ein Geschenk (Even your death was a gift) lasts about 2 hours. The first hour consists of a performance in German spoken language. A synopsis/introduction in English can be found in the evening program. The performance is followed by an installation consisting of four films, during which the audience can move around the room. The lighting situation is overall rather dark, at one point there is a “flashlight shower”. The performances on October 21 and 24 will include a brief moment with very loud noises. Hearing protection will be provided. Low swivel stools are available for seating. For those who need another seating option, two chairs with backrests and one beanbag seat are available. The beanbag seat and one wheelchair space can be reserved by phone or purchased at the online ticket store and box office, if available. Accessibility information is updated on an ongoing basis. If you have any questions or require further information, please contact Gina Jeske at or 030 27 89 00 35.

CORA RUDY VAN DONGEN/FROST worked as a dancer, actor, performance artist and writer from 1981 – 1988. During this time, Cora moved between nightclubs and national theaters, staging quirky, offbeat shows. Since 1978, he has presented his song recitals nationwide on tour and worldwide on guest appearances in Sao Paulo, the opera house of Manaus (Brazil), Paris, Amsterdam, Barcelona, Mexico City, and with Tim Fischer in duet recitals through Syria, Egypt and Sudan, among others. As a dancer he moved to Florida, Chicago and New York. As an actor he worked with Hans Kresnik, Adriana Altaras, Juan Kruz Diaz de Garaio Esnaola and went on tour in Brazil with Das Helmi. He has also worked with Georgette Dee, Popette Betancor, the homeless theater Ratten o7, Jim Avignon, the Klezmatics, Manuela Riva, Wolfgang Müller, Gianna Nannini and Marianne Sägebrecht. The film Paradiso – 7 Days with 7 Women, in which he appeared alongside Hans Zischler and Irm Hermann, won the Silver Bear at the Berlin Film Festival in 2000 for the ensemble of actors. Since 2004, in addition to touring as a singer-songwriter, Cora Frost has increasingly worked for the puppet theater Das Helmi, as a performance artist and for musical theater. He has been showing works at Sophiensæle since 2012. www.corafrost.de

FRANZ REIMER (*1977) has been developing and realizing experimental exhibition situations and architectures for media art as a media artist and curator for many years. His works are shown nationally and internationally in exhibitions and at media art festivals. For example, his installation THE SITUATION ROOM has been shown in the exhibition SCHWINDEL DER WIRKLICHKEIT at the Akademie der Künste Berlin in 2014 and at the Kunsthaus Graz in 2019. In search of new forms of expression and artistic exchange, he is increasingly playing the stages of theater and film.

A production by Cora Frost in co-production with SOPHIENSAELE as part of the Coming of Age festival. Funded by the Capital Cultural Fund. This project was part of the residency program of schloss bröllin e.V., funded by the Ministry of Education, Science and Culture of the State of Mecklenburg-Vorpommern and the County of Vorpommern-Greifswald. Media partner: Berlin Art Link, taz. die tageszeitung, tipBerlin